I got hold to Office Professional 2010 today and installed it on my machine now. The first feel I got was,“WOW, I have it with me now !!”.
The performance has improved significantly when compared to Office 2007(office 12). The ribbon buttons are more clean and neatly arranged and it pulls you to use them. Really Funnntasssttiiicc!!!
In this article, let’s look at some cool things in Word 2010.

You can also request for a Technical Preview here.

The first thing which I observed was the, Office logo design was changed, the one which is in the left top corner.

Hold a min… This is not only a design change, but it does a lot more stuffs than expected. It gives a detailed menu options now. 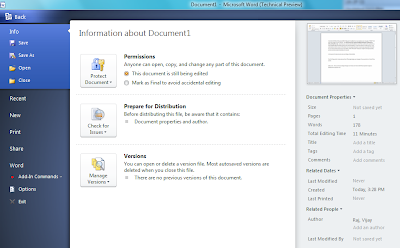 You do have a paste preview option, when you paste in some content, you can now preview how it will look depending on your choice, making it much less likely to undo a paste option. Hover your mouse over each option, and you’ll see the effect that using that option will have on the operation.

There are also nice photo editing tools, accessible via the Ribbon. Select a photo or picture and make it the way you like. A new “artistic effects” feature is added. 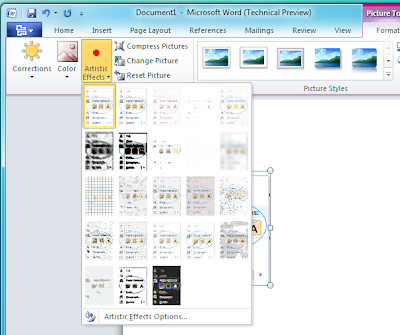 There are lot more features, but I could just pen down these few. Last but not the least; when you close a document without saving, you get a nice meaningful message. I love this change in MS products since Windows 7.

Thanks a lot VJ, for your quick update on Microsoft Office 2010. I really surprised to see this information. Keep it up dude 🙂

Hi Amit, Few of the MVPs have raised this issue at Connect.microsoft.com. Hopefully, we should get some inputs from MSFT soon.

Will update this space, as soon as I get to know.!!

Thanx a lot ,for give me this imp information of update on Microsoft Office 2010 ,